Refocusing our Sponsors Program; a call for new Sponsors in specific countries

Some small organizations who want to register metadata for their research and participate in Crossref are not able to do so due to financial, technical, or language barriers. To attempt to reduce these barriers we have developed several programs to help facilitate membership. One of the most significant—and successful—has been our Sponsor program. Sponsors are organizations that are generally not producing scholarly content themselves but work with or publish on behalf of groups of smaller organizations that wish to join Crossref but face barriers to do so independently.

This blog post is from Lettie Conrad and Michelle Urberg, cross-posted from the The Scholarly Kitchen. As sponsors of this project, we at Crossref are excited to see this work shared out. The scholarly publishing community talks a LOT about metadata and the need for high-quality, interoperable, and machine-readable descriptors of the content we disseminate. However, as we’ve reflected on previously in the Kitchen, despite well-established information standards (e.g., persistent identifiers), our industry lacks a shared framework to measure the value and impact of the metadata we produce.

When Crossref began over 20 years ago, our members were primarily from the United States and Western Europe, but for several years our membership has been more global and diverse, growing to almost 18,000 organizations around the world, representing 148 countries. As we continue to grow, finding ways to help organizations participate in Crossref is an important part of our mission and approach. Our goal of creating the Research Nexus—a rich and reusable open network of relationships connecting research organizations, people, things, and actions; a scholarly record that the global community can build on forever, for the benefit of society—can only be achieved by ensuring that participation in Crossref is accessible to all.

In August 2022, the United States Office of Science and Technology Policy (OSTP) issued a memo (PDF) on ensuring free, immediate, and equitable access to federally funded research (a.k.a. the “Nelson memo”). Crossref is particularly interested in and relevant for the areas of this guidance that cover metadata and persistent identifiers—and the infrastructure and services that make them useful. Funding bodies worldwide are increasingly involved in research infrastructure for dissemination and discovery.

What does the sample say?

At Crossref Labs, we often come across interesting research questions and try to answer them by analyzing our data. Depending on the nature of the experiment, processing over 100M records might be time-consuming or even impossible. In those dark moments we turn to sampling and statistical tools. But what can we infer from only a sample of the data?

Imagine you are cooking soup. You just put some salt in it and now you are wondering if it is salty enough. What do you do next?

If your answer was option #3, read on. Your life is going to get easier!

Sampling and estimating drew my attention while I was working on the evaluation of the reference matching algorithms. In Crossref’s case, reference matching is the task of finding the target document DOI for the given input reference string, such as:

For several weeks now I have been investigating a simple reference matching algorithm based on the search engine. In this algorithm, we use the input reference string as the query in the search engine, and we return the first item from the results as the target document. Luckily, at Crossref we already have a good search engine in place, so all the pieces are there.

I was interested in how well this simple algorithm works, i.e. how often the correct target document is found. For example, let’s say we have a reference string in APA citation style generated for a specific record in Crossref system. How certain can I be that it will be correctly matched to the record’s DOI?

I could calculate this directly by generating the APA reference string for every record in the system and trying to match those strings to DOIs. Since we already have over 100M records, this would take a while and I was getting impatient. So instead of eating the whole pot of soup, I decided to stir and taste just a little bit of it, or, academically speaking, use sampling and confidence intervals.

These statistical tools are useful in situations, where we have a large set of items, and we want to know the average of a certain feature of an item in our set, or the proportion of items passing a certain test, but calculating it directly is impossible or difficult. For example, we might want to know the average height of all women living in USA, the average salary of a Java programmer in London, or the proportion of book records in the Crossref collection. The entire set we are interested in is called a population and the value we are interested in is called a population average or a population proportion. Sampling and confidence intervals let us estimate the population average or proportion using only a sample of items, in a reliable and controlled way.

In general I wanted to see, how well I can estimate the population proportion of records passing a certain test, using only a sample.

In the following experiments, the population is 1 million metadata records from the Crossref collection. I didn’t use the entire collection as the population, because I wanted to be able to calculate the real proportion and compare it to the estimates.

Estimating from a sample

I took a random sample of size 100 from my population and calculated the proportion of the records correctly matched - this is called a sample proportion. In my case, the sample proportion is 0.92. This means that in my sample 92 reference strings were successfully matched to the right DOIs. Not too bad.

I could now treat this number as the estimate and assume that 0.92 is close to the population proportion. On the other hand, this is only a sample, and a rather small one, which raises doubts. What if our 92 correct matches happen to be the only correct matches in the entire 1M population? In such a case, our estimate of 0.92 would be very far from the population proportion. This uncertainty related to sampling randomness can be captured by the confidence interval.

It seems the our interval got smaller when we increased the sample size. Let’s plot the intervals for a variety of sample sizes: 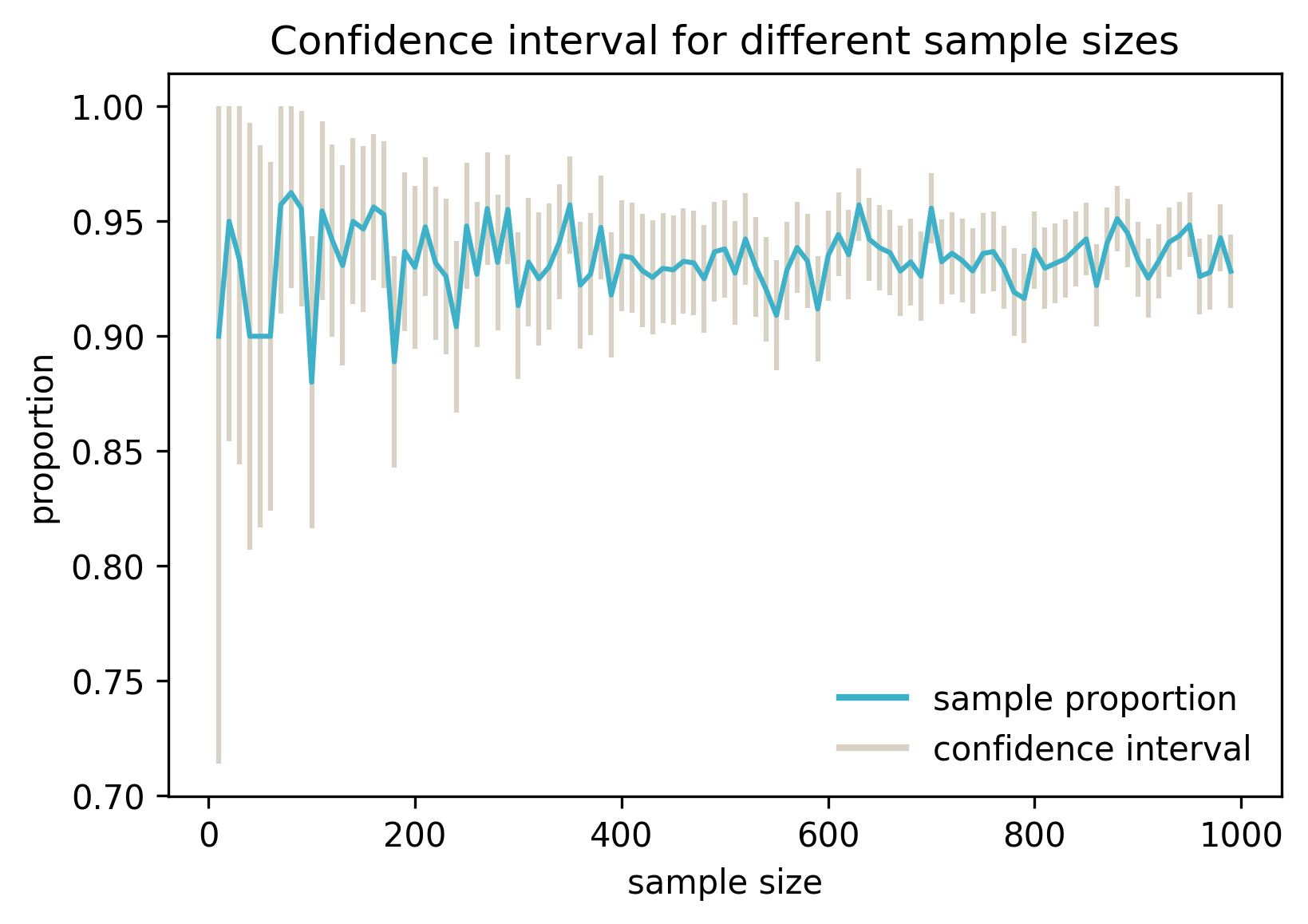 We can see that increasing the sample size decreases the interval. This should make intuitive sense: if we have more data to estimate from, we can expect our estimate to be more reliable (i.e. closer to the population proportion). 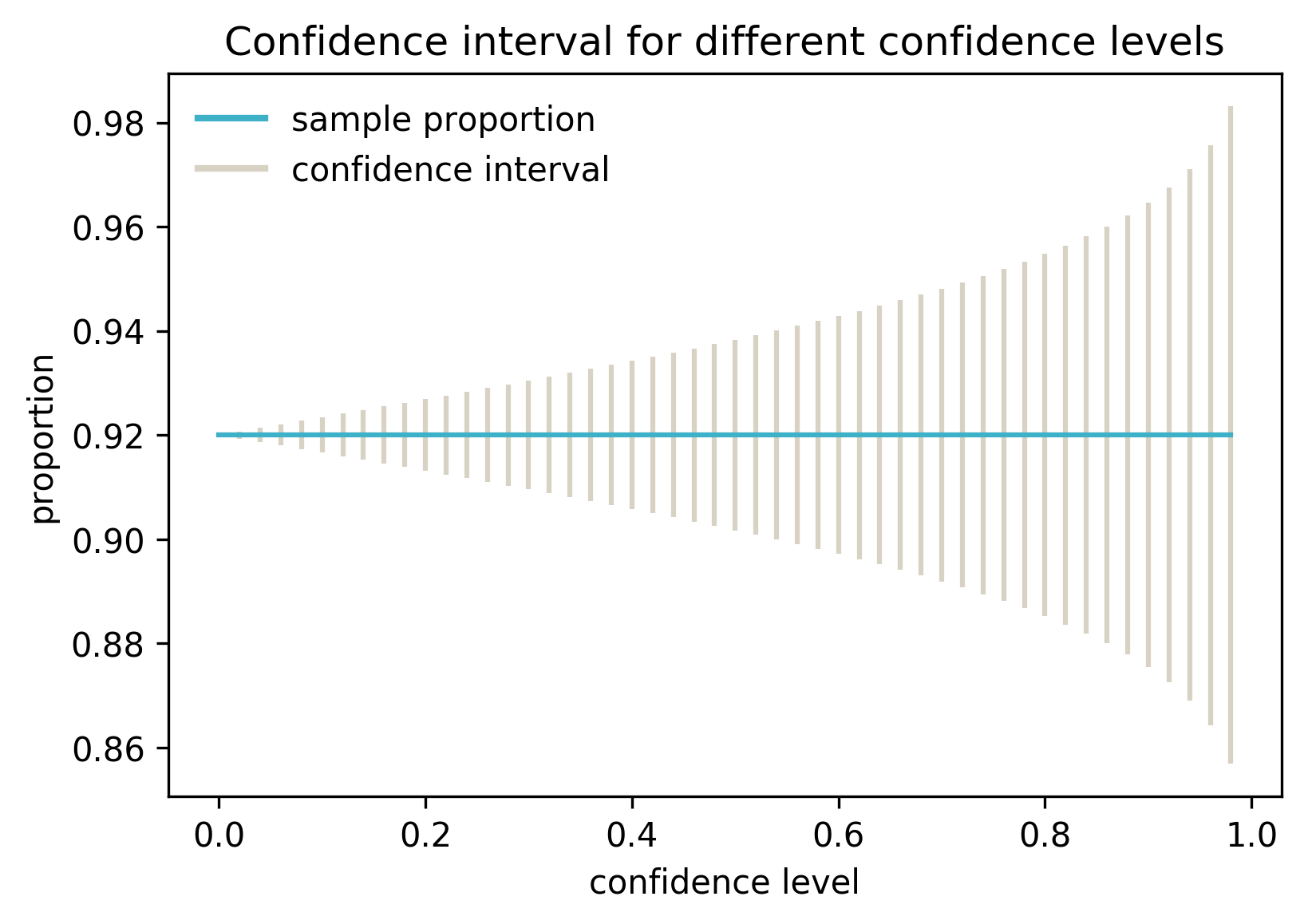 In this case the average is always the same, because only one sample was used.

As we can see, increasing the confidence level widens the interval. In other words, the more certain we want to be about the interval containing the real population average, the wider the interval has to be.

So far so good, but where does this magic confidence interval actually come from? It is calculated by the theoretical analysis of the sampling distribution (not to be confused with sample distribution): 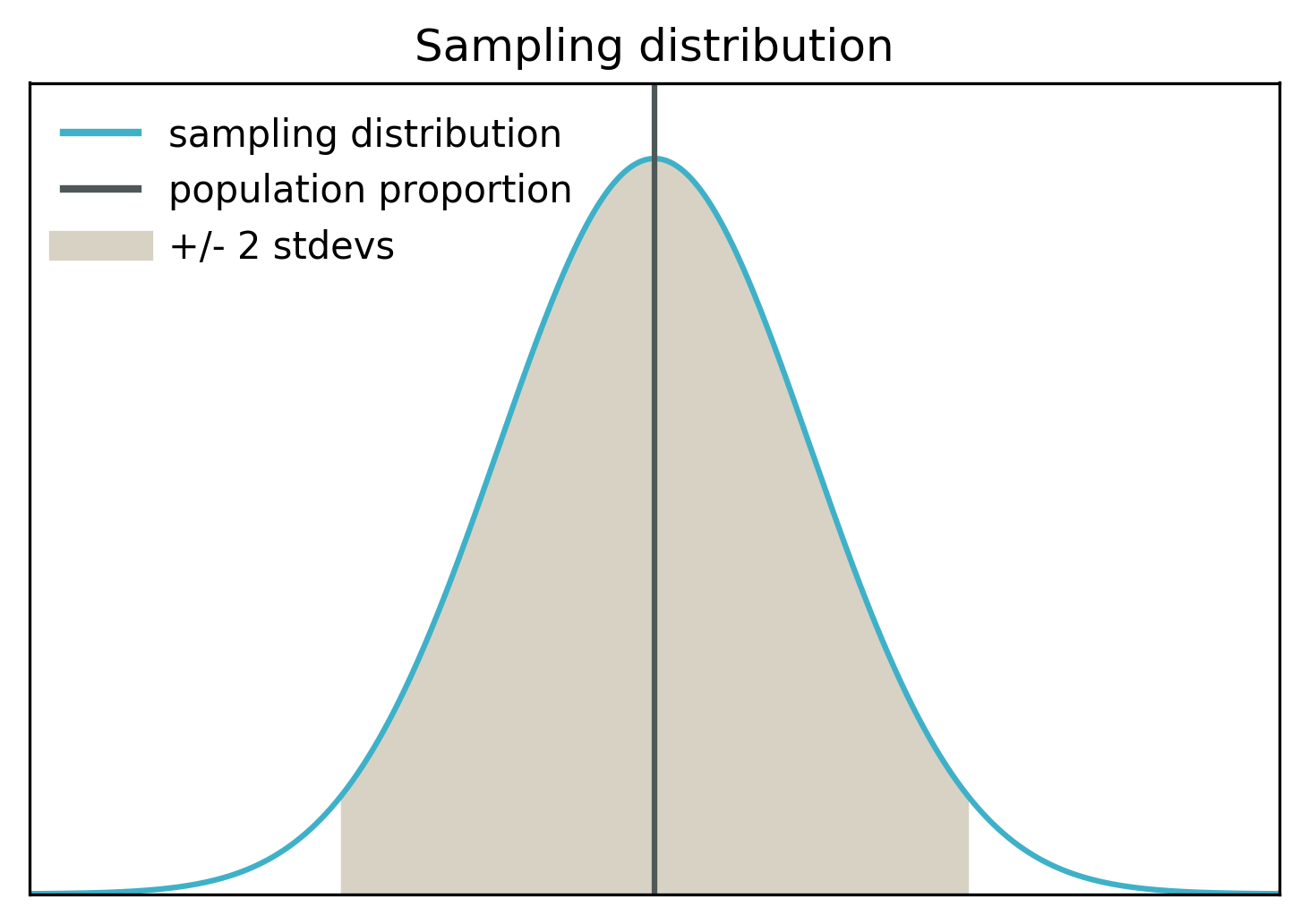 The black vertical line shows the mean of the sampling distribution. This is also the real population proportion. The grey area covers the middle 95% of the distribution mass (within 2 standard deviations from the mean).

When we choose one sample and calculate the sample proportion, there are two possibilities:

Here is the heatmap showing the mean of each sampling distribution (this should be approximately the same as the real population proportion): 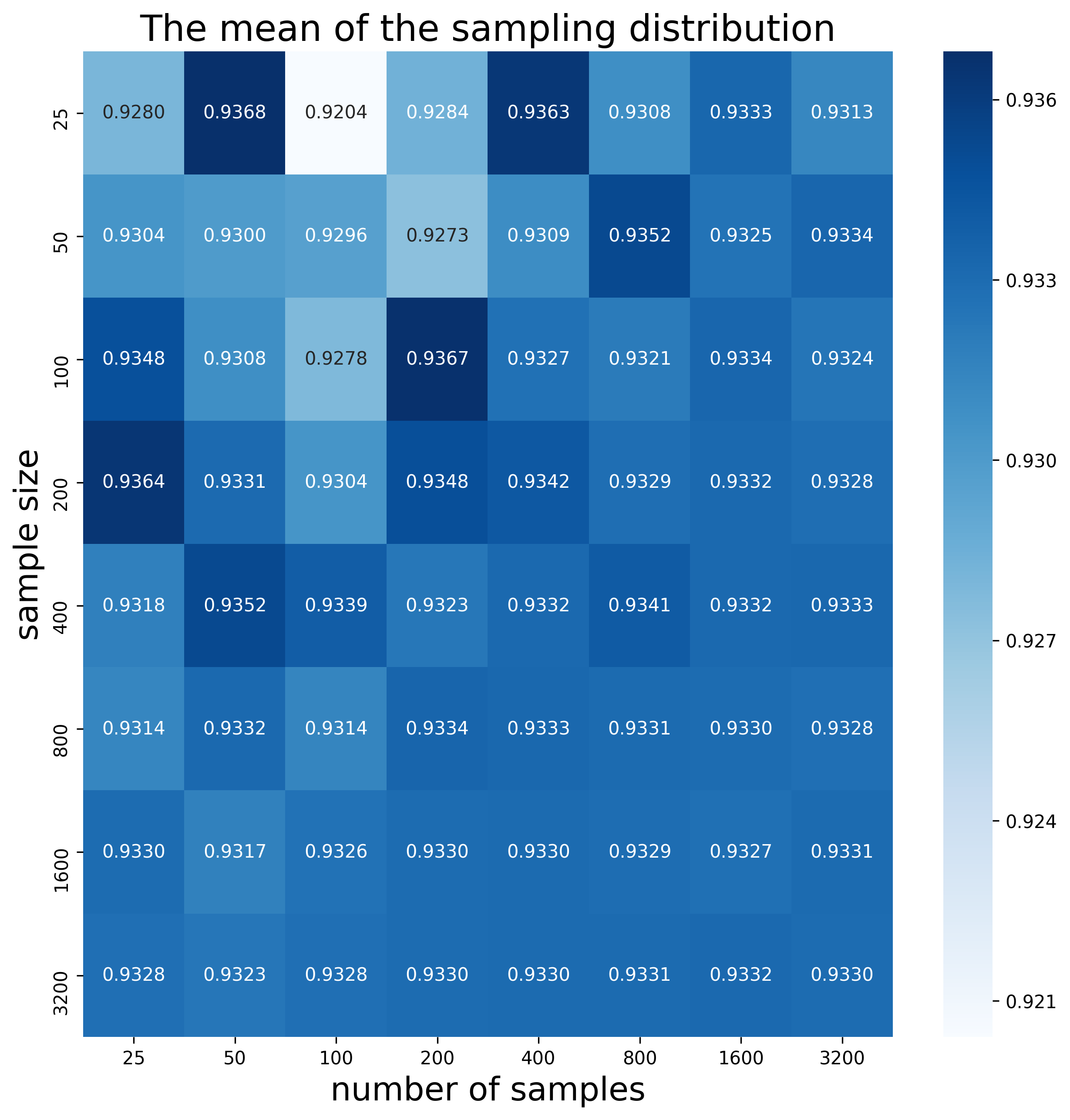 Here is the heatmap showing the standard deviation for each sampling distribution: 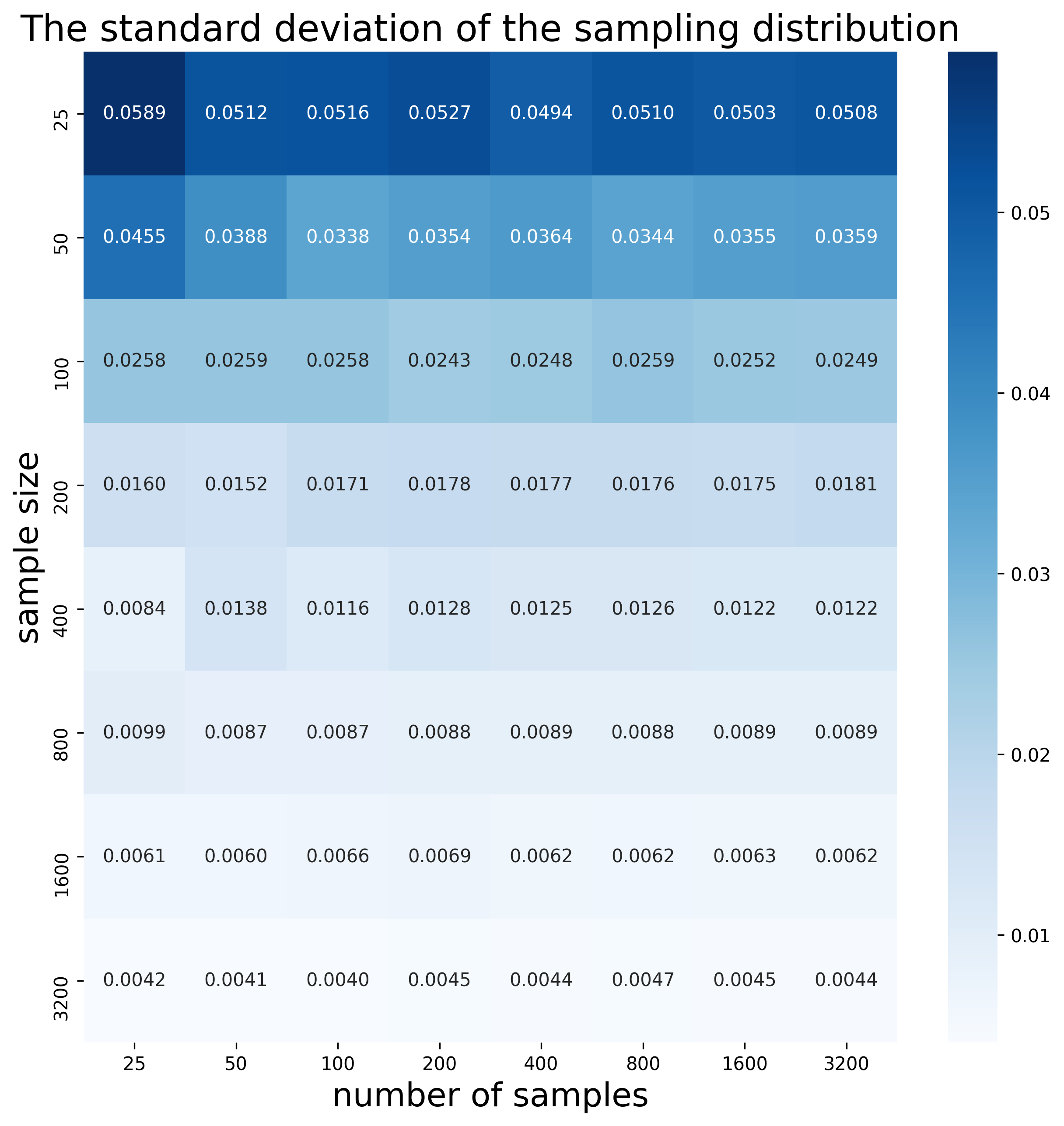 Let’s also see the histograms of all the sampling distributions: 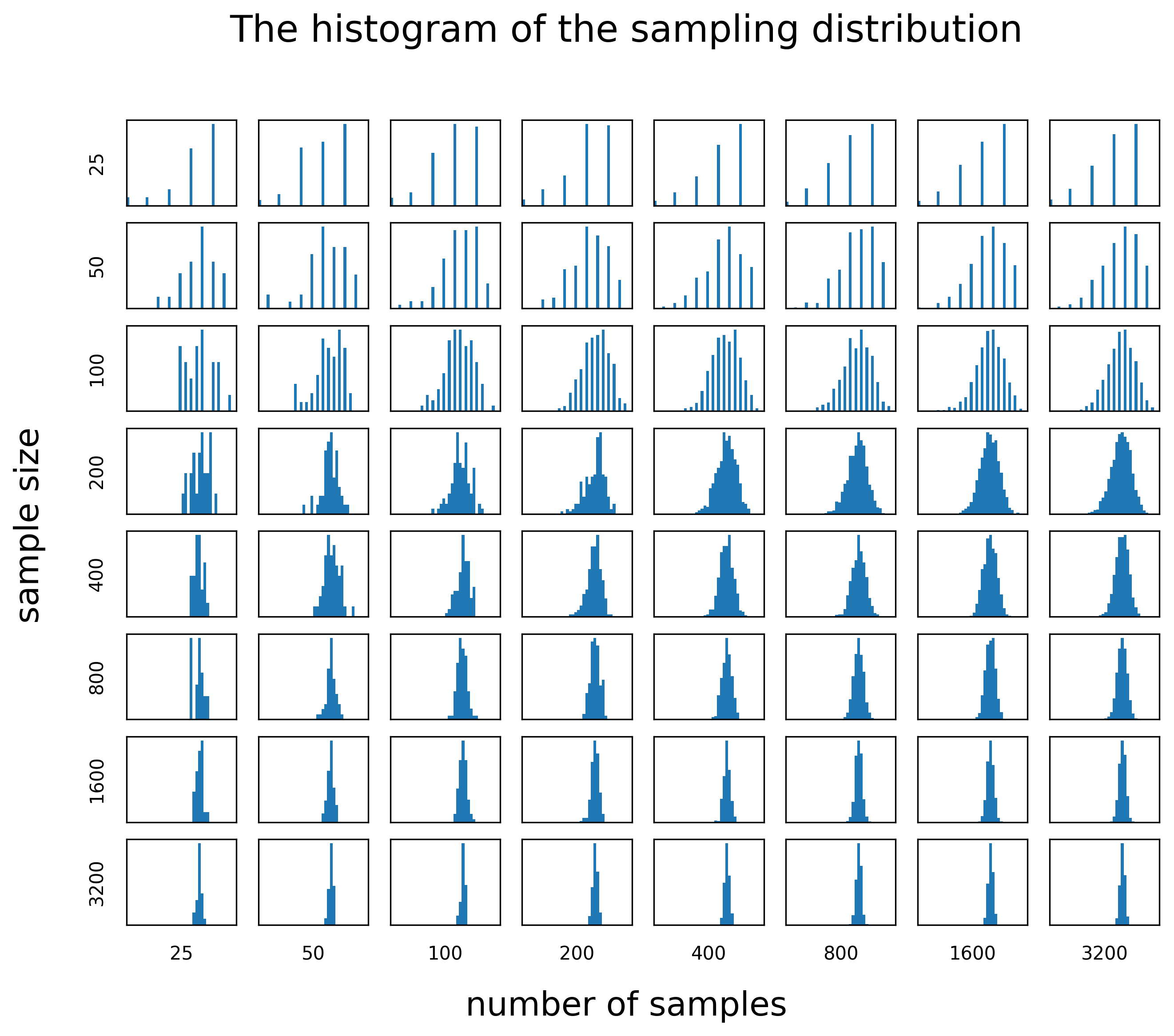 Here we can see the following patterns:

The estimation vs. the real value

Let’s go back to my original question. What is the proportion of reference strings in APA style, that are successfully matched to the original DOIs of the records they were generated from? So far we observed the following:

So what is the real population proportion in my case? It is 0.933005. As we can see, the estimations were fairly close, and the intervals indeed contain the real value.

Now I can also calculate the confidence interval for each sample in my sampling distributions, and then the fraction of the intervals that contain the real population proportion (I expect these numbers to be close to the confidence level 95%). Here is the heatmap: 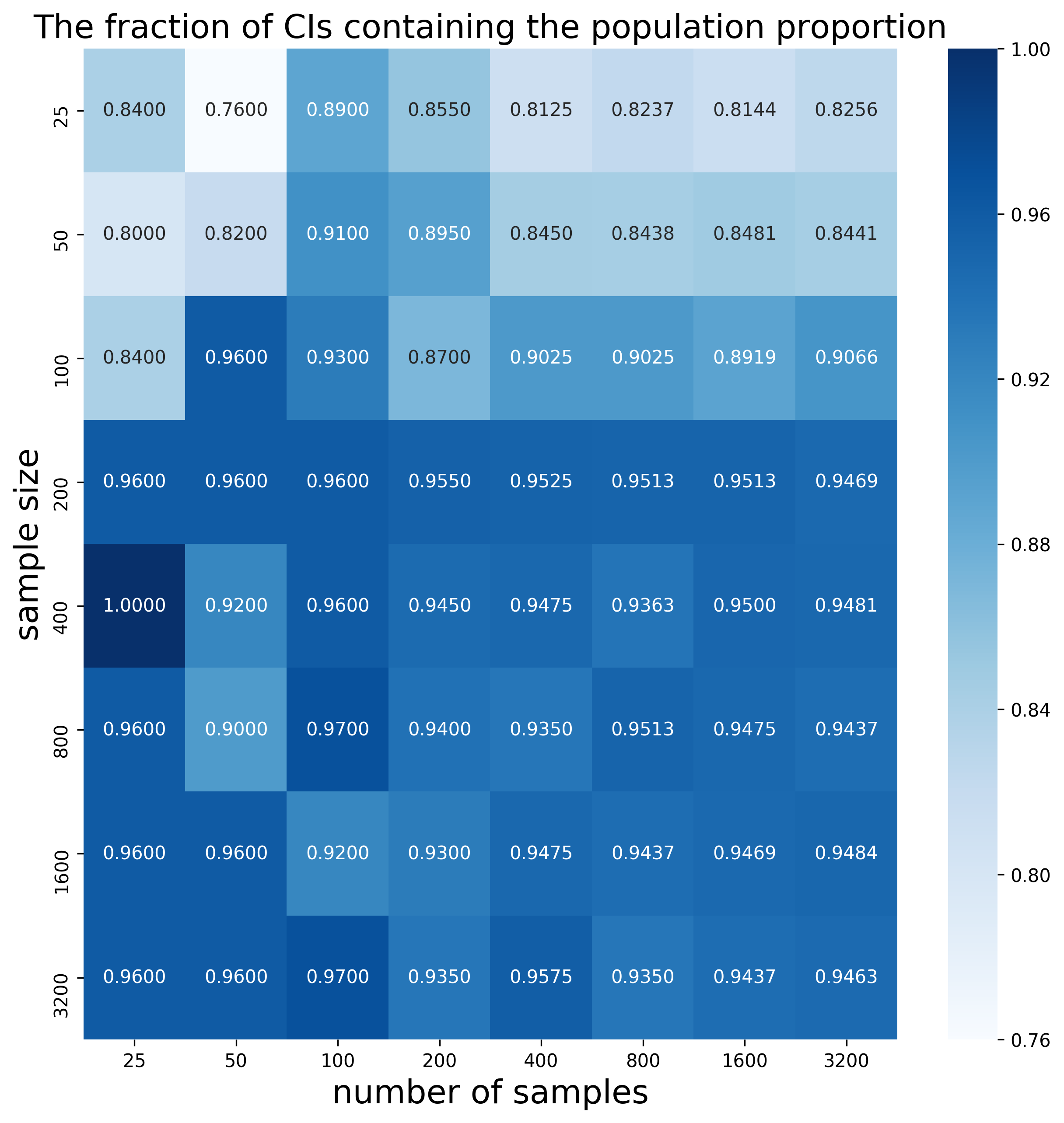 We can see that for larger sample sizes indeed the fractions are high. The fraction is not always above 95%, as we would expect, especially for smaller sample sizes. One of the reasons is that when we calculate the confidence interval, we approximate the standard deviation of the population with the standard deviation of the sample. This is not always a reliable estimate, especially for small samples. This suggests that sample sizes of at least 1000-2000 should be used.

Some important things to remember:

Refocusing our Sponsors Program; a call for new Sponsors in specific countries